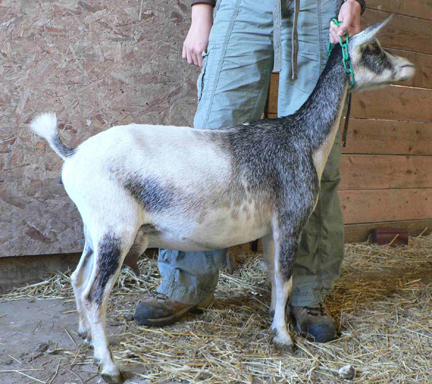 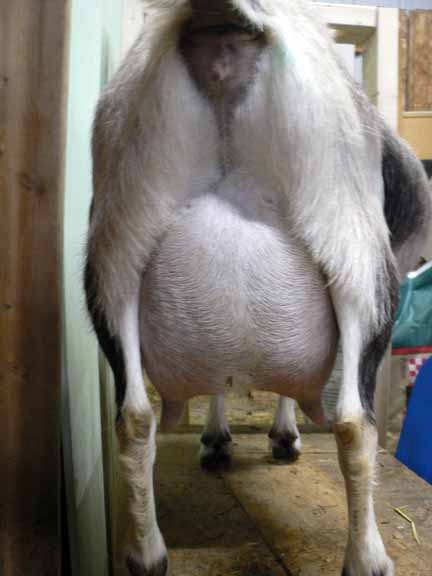 Anne is another outstanding Sherri daughter. The photo on the left shows her as a first freshener at a show in 2007. She has the longest teats in the herd — I can fit four fingers on them at the beginning of the milking — and she has a soft udder that is very easily milked. I do wish she had larger orifices, but you can’t have everything. As a second freshener, Anne peaked at around 3 pounds a day, and as a four year old in 2010, she produced 4.4 pounds at three weeks fresh on her first DHI milk test. The udder photo was taken on test day with 12 hours of milk at age 4. She classified as VG with a score of 88.8 in 2010 under Tim Flickinger.

But the numbers only tell half the story about Anne Bronte! She was originally supposed to be sold as a kid, but the buyer never sent the deposit, and we decided not to put her back on the sale page. She is one of the finest examples we have of a wonderful dam-raised milker. When she was a youngster, we moved her across the creek to separate her from her mother, but she went through a hot wire, across a creek, and through another hot wire to get back to her mama! My daughters created new lyrics for the song, “Ain’t No Mountain High Enough” — I’ll never forget their laughter as they started singing, “Ain’t no fence hot enough, ain’t no creek wide enough, to keep me from gettin’ to you ma!” Today, Anne is the sweetest, most in-your-face goat to us humans, often coming up to us in the pasture wanting to be scratched behind the ears. She is a great mother to her babies and has an excellent will to milk.