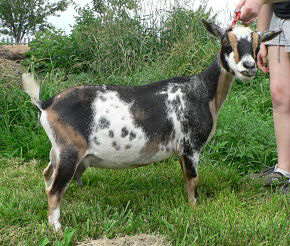 When someone emails and says they are looking for a family milker, we often recommend a doe out of Sherri or one of her daughters. Sherri is, without a doubt, the goat we value most because she has consistently thrown daughters better than herself, both in production and conformation. We have kept six of her daughters for ourselves and now have two of her granddaughters. This line consistently has easy kiddings, and the does are excellent moms. Her kids are naturally friendly when dam-raised and inherit her great personality as a mom and a milker. And it’s just gravy that she always throws the most colorful kids.

Sherri came to live at Antiquity Oaks as a first freshener

in April 2004. We loved her personality from day one — she is one of those

goats you can milk anyplace, anytime, with or without a milk

stand, and she won’t give you any grief about it. We took her to our first goat show a month after we bought her, and being our first show, we completely forgot about taking a milkstand. But it wasn’t a problem! Sherri patiently stood in the middle of the barn twice a day while we milked her at the show. She never did well in the show ring, although she classified VG with a score of 86.4 in 2010 under Tim Flickinger, so she’s certainly not ugly.

Sherri is perfect as a family milker – and so far, her daughters have been outstanding

as well! All four of the daughters we have kept, which have freshened, have earned their milk stars. Shirley Jackson 4*D

earned her one-day milk star as a first freshener, milking

On Sherri’s first test day in 2010 at age 7, she produced 4.6 pounds at 21 days fresh. Her complete milk record is below. We cut her lactation short because she freshened in May 2010, and we wanted all of the goats to freshen in 2011 no later than March so that everyone would be at peak production for lots of cheesemaking over the summer.

We always tell people who buy Sherri’s kids or even grandkids that this line gives birth very stoically and quickly. They don’t make a sound until the head is coming out, which has made for some mad dashes towards the barn at 2 a.m. when we heard a scream on the baby monitor. If you work full-time, you should not breed these goats to kid in the dead of winter, because they’re often born too rapidly for the mom to be able to clean them up adequately before they get hypothermia.

Sherri’s kids are always named after writers, except in 2008 when she had quad does, we named them after the four March sisters in Little Women.