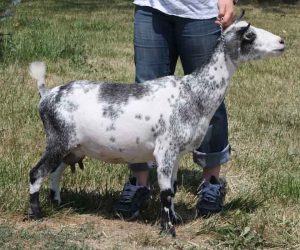 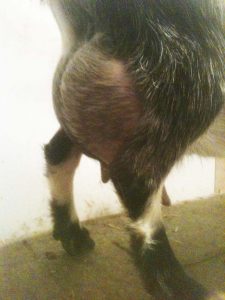 Agnes was one of the best first freshening producers we’ve ever had on our farm, as well as Alexandria. Both does earned milk stars in their first freshening, and Agnes was still producing close to a quart a day after ten months. She ultimately milked for 13 months and dried up because we bred her again. In addition to her excellent production, she also has the best teats I’ve ever had on any doe, Nigerian or la mancha. She also has large orifices and a soft udder with a smooth fore udder. Agnes is also the friendliest goat in the pasture, always running up to anyone who goes out there, and if you don’t pet her enough, she won’t hesitate to grab your clothes and give them a yank to get your attention!

The full-body photos really do not do justice to her mammary system, but now that my daughters are grown up, I don’t often have anyone to help me take photos at the most opportune times. They were taken when she was a first freshener at ten months fresh and only had six hours of milk in her udder. The udder picture is her second freshening at one month fresh during our milk test with 3 pounds of milk in the udder.

Agnes has two milk records listed for 2011 because she milked straight through for more than 13 months without freshening again. The first record is her 305-day lactation, and the second record is her complete lactation.