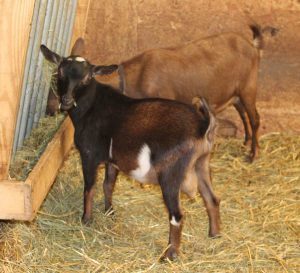 We kept Austin because of his mother’s incredible longevity for milking. She was in milk for 18 months as a first freshener and then for three years as a second freshener. She is six years old now, and has only freshened three times, but has been in milk continually (except for the last two months of pregnancy). She also has a soft udder with easily milkable teats. To learn more about her, click on her name in the pedigree below. We chose Austin’s sire because his dam Sherri consistently gave us outstanding milkers through the years, including Charlotte Bronte, our best milker ever, who peaked at 3 quarts a day.

Austin is pictured fall 2013 when he was less than a year old.