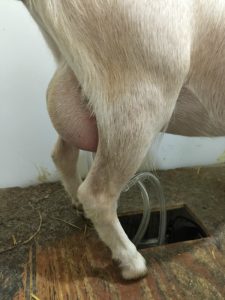 Blanche is the second doe that we kept out of Lizzie. We loved her sister Sadie so much, we decided to keep a second Lizzie daughter. Blanche has not disappointed us. She had triplets as a first-freshening yearling and triplet does as a second and third freshener. She has the same excellent parasite resistance as her mama, grandma, and sister, never needing any type of dewormer in her life as I write this in May 2017. Although her production started out slow as a first freshener (like her mama and sister), it increased a lot for her second freshening. In her third freshening, her daughters have the best weight gain of any of the 2017 kids.